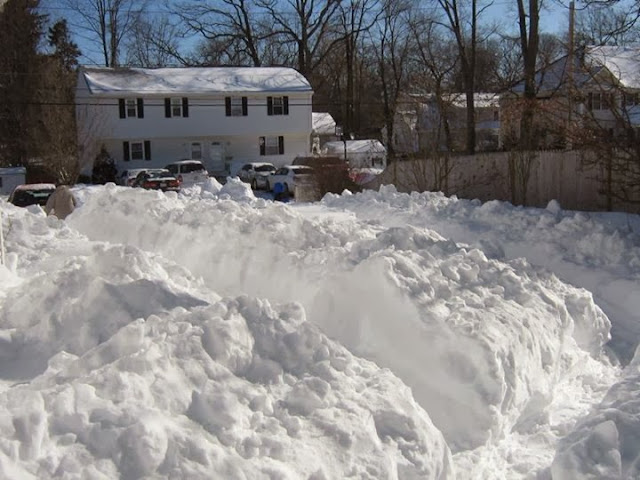 Greetings from Massachusetts, where I write to you from under two feet of snow!

Don't worry: they gave us lots of advance warning.  That's why on Wednesday I was already dreaming about which dish I would choose to make during the storm.

The most popular dish in Avellino is minestra maritata con la pizza bionda (in dialect, 'a menesta maretata co' 'a pizza jonna) — literally, "married soup with blonde pizza." Every cook in Avellino makes it, although they make it only in wintertime.

I had never made menesta.  I was dreaming about it for two reasons: (1) We are, without doubt, in wintertime! (2) A week ago, Frank Fariello, author of “Memorie di Angelina” (memoriediangelina.com), the best Italian-American foodblog on the Web, posted an excellent recipe for minestra.  (Angelina was from Apice, a town in the province of Benevento on the Avellinese border.)

’A menesta maretata was the precursor to the delicious but stupidly named, "Italian Wedding Soup," served at almost every Italian-American wedding feast.  But the word maretata ("married") refers to the marriage between the greens and the meats.

Step I: The meat stock 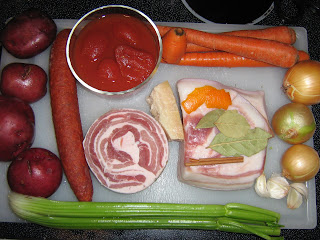 It's preferable to make the stock the day before, so that the lard will rise to the top and harden.  In my case, being in the clutches of the snowstorm, I didn't waste space in the fridge; I put the pan out on the porch!

To a certain extent, you use the meats that you have.  A cousin of mine from Avellino, Raffaele S. Ciampa, uses sausages and pancetta.  "Then if you really want to be traditional," Raffaele continues, "a pig's foot, a pig's tail, a pig's ear, cotechino, hot sausages.  You can use any of these that you like.  You can also use smoked meats." (Certain cooks, like Frank Fariello, prefer not to put smoked meats in this dish.)

The meats that I had in the house:

To flavor the stock, you can see from the photo that I used: 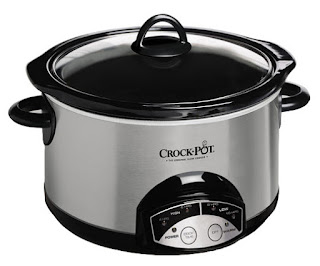 Usually I make stock in a crockpot.  A crockpot is an appliance that every professional person must have.  Let me digress a little about the crockpot, to explain how useful it is in your kitchen.  (The following is a sample recipe.) You wake up in the morning.  You go in the freezer and you take out a big 3-lb. frozen pot roast — I mean frozen, like a boulder, like the Rock of Gibraltar.  You put it in the crockpot.  You add vegetables.  You add a bottle of red wine (or 750 mL water).  You put on the cover.  You hit the button.  You go to work.  You're not worrying about the crockpot, because it's simmering very slowly, and when the predetermined cooking time elapses, the crockpot automatically shuts off and goes to "warm."  You come home from work in the evening, and now the Rock of Gibraltar is so soft that you don't even need a knife.  Do you understand what I'm saying to you?  Plus, the flavors of the broth are perfectly amalgamated; the taste of the wine does not stand out.   And how much time did it take to prepare this majestic meal?  Five or ten minutes! (The above is a sample crockpot recipe that has nothing to do with menesta. We return now to our recipe!) 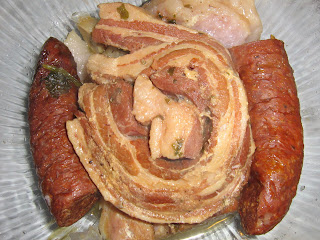 The meat stock is ready.  Into four receptacles, separate: the lard which has risen to the top; the meats; the potatoes; and the stock.

(A brief digression: I mentioned earlier that I used broccoli rabe stalks — usually hard and very bitter, now tender and very tasty!  I saved them; today or tomorrow I will chop them in small pieces and add them to pasta.  Yum!)

To make polenta, I always use the recipe by Lidia Bastianich (even though she is from Northern Italy).

4 cups water, or use half milk for a richer taste
1 tablespoon unsalted butter  (Cousin Raffaele uses instead 3 tablespoons lard)
1 bay leaf  (which I omitted this particular time; I'd already put a couple in the stock)
1 tablespoon coarse salt
1½ cups coarse yellow cornmeal

In a medium cast-iron saucepan or other heavy pot, bring all ingredients except cornmeal to simmer over medium heat.   Very slowly, begin to sift corn meal into the pan through the fingers of one hand, stirring constantly with a wooden spoon or whisk. (This operation will be greatly facilitated if the meal is scooped by the handful from a wide bowl.)   Gradually sift remaining meal into the pan, continue to stir, and reduce heat to medium low. Continue to stir until the polenta is smooth and thick and pulls away from the sides of the pan as it is stirred, about 30 minutes.   Discard bay leaf.

At this point, you have two choices: (1) Pour the polenta onto a large, wooden cutting board and let it rest at room temperature; (2) Pour the polenta in one or two pans (I like Pyrex) and put them in the fridge. (Read Step IV to decide which type of "pizza" you will make.  Then you will know which of the two choices you want to make.)

I repeat what I said earlier: to a certain extent, you use what you have in the fridge.


Traditionally, what were the greens used in minestra maritata?

In Torre le Nocelle, a small Avellinese town near Montefalcione (my great-grandmother was from Torre), they use a mixture of greens called asciatizza: chicory, dandelion greens, wild fennel leaves, borage leaves, and cardilli (puntarelle). 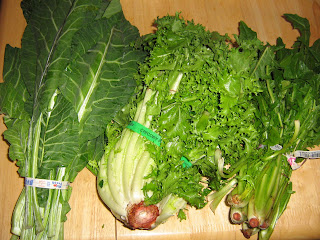 The three greens that I had in the fridge made a wonderful trio:

With the collards, take off the stems, which are hard like Swiss chard stems.

With the chicory, cut off only the bottom.  But wash the stems very well.

With the dandelion greens, the leaves are delicate and interesting.  The stems, however, are very hard and bitter.  Take them off.

Have the separated stock on the stove, simmering slowly.  (It's already cooked; you're only keeping it hot, not making it evaporate.) 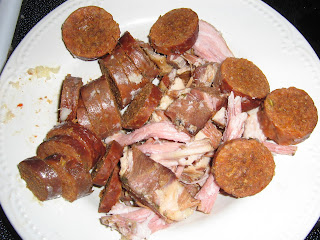 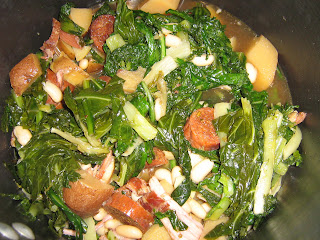 "Blonde pizza" has many names in Italian and in dialect: pizza bionda, pizza jonna, ’a pizza ’e rarigno, pizza di granone, pizza di farina gialla. Basically, it just means polenta.  In Avellino they use a special clay pot called a chinco. (It is made of terrasecca, not terracotta. The clay is sun-dried.) The ancient process is described at torrelenocelle.com:

("Put coals in the chinco for about ten minutes. Remove the embers, and after lining the inside of the chinco with chestnut leaves, pour in the polenta, cover it with one more layer of leaves and tin foil. Finally, bury the pan under the hot ash and cook until a crisp, golden crust has formed over the pizza.")

If you're like me, you do not happen to own a chinco!  Not to worry: there are many methods for making polenta, all authentic to the Campania region:

1. At Step II, pour the polenta onto a large, wooden cutting board and let it solidify at room temperature.  When it is hardened enough, put the menesta on top of it, take the large cutting board to the table, and everyone takes their portion from the cutting board, family-style.

2. Take the pan of polenta from the fridge and bake it in a 350º oven for about a half-hour.

3. Take the pan of polenta from the fridge.  Slice the polenta, and fry the slices in a frying pan.  Now, in the olden days, the frying pan was cast iron, seasoned not with oil but with lard!  The result was a nonstick pan, from which every food that emerged was tasty!  At this point you will not be surprised that our ancestors fried the slices of polenta in lard.

Usually, I use the 3rd method.  Nowadays, frying pans are usually stainless steel or a nonstick surface like Teflon.  I use a wonderful Scanpan, made of ceramic-titanium.  But yesterday!  Yesterday, I did something a little different! 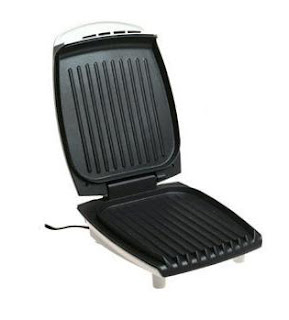 I took the most American kitchen appliance that I have: the George Foreman! Complete name: The George Foreman Lean Mean Fat-Reducing Grilling Machine!  The concept is brilliant.  It's an electric grill that you use indoors.  The surface is nonstick.  It cooks on top and bottom simultaneously.  And the most brilliant part: the base is on an incline.  The fats flow out of the food.  Not because of a complicated scientific process, because of gravity.

I succumbed to my conscience.  I greased the grill with olive oil.

Place the grilled polenta on a plate.  Put the menesta on top.  Sprinkle freshly grated pecorino romano or caciocavallo. 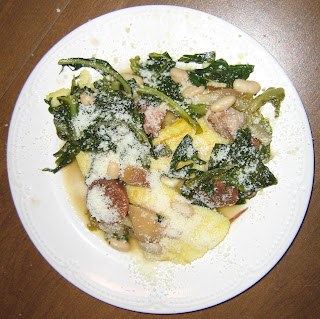 With menesta, I like a white wine from Campania full of character.  I am particularly fond of Falanghina, a varietal with a very long history.  Two Avellinese wineries make an exceptional Falanghina: Feudi di San Gregorio and Donnachiara.

However, many people in Avellinese prefer a red wine with menesta. When I asked Ilaria Petitto, general director of Donnachiara, which is the best wine to pair with menesta, she replied thus: I would suggest a medium-bodied red wine, such as Irpinia Aglianico DOC, i.e., an Aglianico which was in the barrel for only 6 months, so that it has a certain structure and body. It wouldn’t prevaricate [overpower], as would a much more imposing Taurasi; but it has such a good balance between softness and hardness that it can "dry" the various fats in the menesta. (To read the rest of the very interesting interview with Ms. Petitto, click here.)

Our Most Popular Posts / I Nostri Post Più Popolari

Leonardo Ciampa
Worcester, MA, United States
Born in Boston, LEONARDO CIAMPA is Director of Music at Emanuel Lutheran Church in Worcester, MA (since 2019) and Maestro di Cappella Onorario of the Basilica in Gubbio, Italy (since 2015). He was artistic director of organ concerts at MIT (2009-2016) and founding director of Arts MetroWest (2012-2019). As an organ recitalist, Ciampa has made a dozen European tours encompassing Italy, Austria, Germany, and Switzerland. He is particularly admired in Italy, where he has played in numerous international festivals (Festival Perosiano, Festival Biellese, Organi Storici della Valsesia, Le Voci della Città, Festival Organistico Lauretano, Reate Festival, etc.). As a composer, Ciampa’s compositions have been performed in prestigious venues such as Sanders Theatre (Harvard), Kresge Auditorium (MIT), Mechanics Hall (Worcester), and the Mormon Tabernacle (Salt Lake City); at cathedrals in Vienna, New York City, Boston, Altenberg, Brandenberg, Tortona and Biella, and at basilicas in Rome, Turin, Loreto, Rieti and Gubbio. Ciampa’s books include Don Lorenzo Perosi (the first English-language biography of that composer), and Gigli (the first book on the great tenor in English in 56 years).